If anybody has problmes have a look at the raspberry-Pi website here.
I keep an eye on that and get an email message if a post is added there.

On the Raspberry-Pi 3 the auxilliary (or mini) UART port has been used to control the Bluetooth device. As a result all add-on cards which use the UART no longer work. For example xbee and other transmitters, RS485 and unfortunately also the gertbot.

Do NOT enable the UART using the Pi configuration GUI: 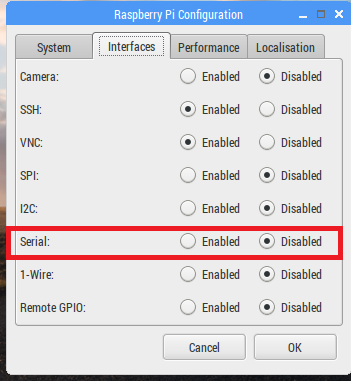 I have heard that some people managed to use the software (bit-bang) UART emulator on pins 14 & 15 alongside Bluetooth. Thus far I have not been able to get this working with the Gertbot. Probably because (Just as with e.g. xbee) the gertbot data is a packet oriented stream with no buffering and binary data and the gertbot driver changes the echo, cbreak tty settings.

The latest Raspberry-Pi image (stretch) has dropped all Qt4 libraries in favor of the Qt5 libraries. This causes the error message:
libQtGui.so.4: cannot open shared object file: No such file or directory
To install the missing libraries open a command prompt window and type:
sudo apt-get install libqtgui4
Work is ongoing to solve all Rasbian image version related issues.